Blankets for the 134th 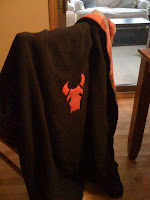 My friend is serving with the "Red Bull" infantry division and is currently in Germany working at the hospital. She emailed me asking for blankets and hats for the soldiers there, and I was thrilled to have such a great project to work on.
I am so excited about the help I've received. Quilters Haven in Rosemount offered to promote the project if I'd supply the materials. The customers there have agreed to do almost ALL of the blankets! WOW! Abbie and I are taking this awesome group of women some cookies this morning in an effort to say thanks. The shop also found someone who is willing to embroider some hats with the red bull logo. What a beautiful community.
I'm hoping that this makes for some happy soldiers this Christmas.
at 9:30 AM No comments: 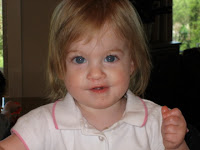 Every mom I know has a Trgt story. You know, one where things went so wrong you thought you might have to switch to a Target down the road? Well, here's one of my worst.

I was trying to use a gift card to purchase something that we couldn't afford if it wasn't for that card. It was right after we had returned from Tokyo and I had Abbie in the baby bjorn (2mos), Clara (14mos) in the front of the cart, and Stephen (almost 3) in the back.
I had bought Clara and Stephen popcorn with the idea that if their mouths were full they wouldn't make those new screeching noises they had just learned at the church nursery. I got the popcorn, gave them each a bag, and then raced like a maniac through the store trying to get everything on my list that I possibly could before the bags were empty.
Also, Abbie was taking one of her rare naps while dealing with reflux. So you understand that my clock was ticking urgently. Mt. Vesuvius would wait for no one.
I made it through the store with two "3 year old fistsfulls" of popcorn to spare. We pulled into our check out lane, me sweating and close to swearing, fighting post-partum unawares. Stephen, with a gleeful screech, THREW the contents of his popcorn bag. I had felt like success was SO close, only to be thrown in little kernels down the aisle. As I leaned down to begin picking up the pieces while the checkout girl chewed her gum and watched, I felt the Stephen's paper bag come flying on my head - with another gleeful screech.
If I hadn't been at my absolute bottom, I probably would have laughed at the absurdity. As it was, I was praying that the popcorn smell and the up and down motions wouldn't wake Abbie and make her barf down my shirt.
The checkout girl rang up my order, and I handed her my precious gift card. Now, this card was from a return I made at the beginning of my shopping trip. It had about $30 on it and I had counted every bit of it using sales and specials. I knew Brian would be proud of my frugality. The girl swiped the card - and only $6 came off my total.
WELL.
I took a deep breath. And another. Smacking gum girl looked at me a little warily.
I slowly, deliberately explained that there was a mistake and began to frantically look for the receipt that would give me some credibility. Stephen and Clara (popcorn gone) began attempting to harmonize their screeches.
Gum girl slowly reach her right hand out and flip on the "help me please, crazy woman here" light. A manager appeared shortly. A manager who obviously had no children, no sympathy, and no charm. She used small words to explain to me that I was only going to get $6 from my card.
That was it. The dam burst. I began crying. Then sobbing. Then some little giggles came out with the tears.
Gum girl and Mean manager each took a step back. Seriously. They stepped back away from me and continued to hold their ground regarding the $24. Stephen and Clara briefly stopped their screeching, only to begin again in a valiant attempt to sing a lullaby to me.
I swiped my debit card, silently praying that God would make the $24 appear in my account. It cleared, I packed up my things through my tears, and walked out of there completely defeated.
A friend, Jen was so wonderful to me during that time. I can remember showing up at a Bible Study she was leading - and bursting into tears every time someone would ask me how I was.
My parents had moved out of town and I felt completely alone. Who can you be that vulnerable with and ask for help that you can't even fathom returning? Betsy, Emily, and Teresa to the rescue (along with Jen). They started alternating days to take my kids and give me breaks. It was truly a time where I sucked the church family dry for everything I could.
It got better.
I got better.
And sweet Jesus began to show me how much He wanted me to be in a real 2 -way relationship with Him.
Looking back it was a wonderful time of growth and pruning. But I sure felt naked for awhile. Nasty Trgt runs included.

This is such a great idea. I think that Abbie and I will try and pull it off today and start a new family tradition!
Another project ... Stephen made a book all about holidays. I suggested that he and I make one about the feasts of Israel. We'll see if we get it all done ... So many projects, so little time. :)
at 9:50 AM No comments: