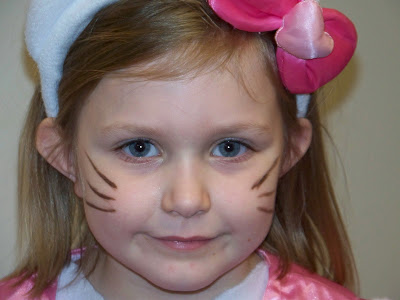 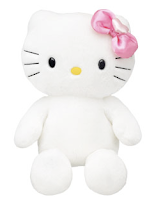 October is costume time - and this year Clara asked to be Hello Kitty.
Just in case you aren't up on Kindergarten costume selection ... this costume doesn't exist. Well, it does. It's just not exactly what we were hoping for. And it's sold out.
Enter: Mom and a sewing machine.
There were a few guidelines that Clara requested. First, it needed to look like the Hello Kitty doll she got from Build-a-Bear with her Noni. Second, the costume needed to have a pink dress with white polka-dots.
OK.
I started with white fleece. Using a super easy Simplicity Pattern, I made her a pair of white pants and a white long-sleeved T-shirt. Not too tough. And outside in MN friendly. 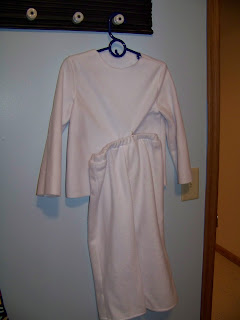 Then I found another easy (read: cheap) pattern for a jumper, and 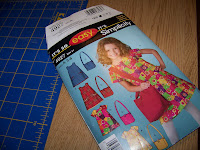 I happened to have some left over pink silky material. I made the little jumper with some extra room to fit over the fleece top and bottom. On the bottom hem of the jumper, I put a band of 2 inches wide stabilizer to give it that cartoony feel. Then I added some white dots using the leftover white fleece and some fusible webbing. 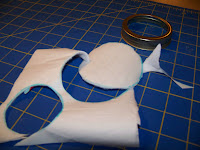 A Mason Jar lid served well for the big circles and the small circles (inside and outside of lid). I should have stitched the circles on after fusing them on the dress - but I was out of time and not feeling too hot. 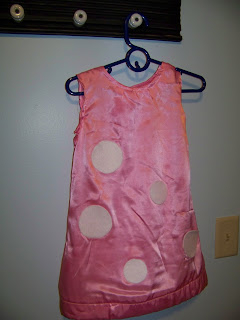 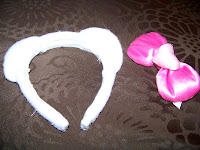 After the outfit was complete I covered a headband with white fleece.
For the ears, I made little 4 inch squares, cut on the
diagonal to make triangles, then rounded them off, sewed them together, and placed them between two strips of fleece. Sounds more complicated than it is. Maybe I'll try a tutorial of this. :) Maybe. Anyway, finished covering the headband using a glue gun and maybe a few burned fingertips. 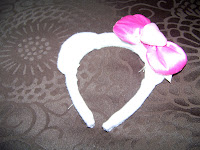 The Build-a-Bear Kitty that Clara has actually has a velcro attached bow. Amen. Amen. Amen. I just sewed a piece of velcro backing to the headband and it was done!
We used the bow from her kitty on her headband - adding to the validity of the costume for Clara.
To finish the ensemble, we got some Hello Kitty slippers at Target and she's set! I think it turned out pretty fun. The only thing we'll have to add is some yellow face paint on her nose. 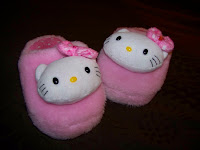 Voila! She's SO cute. :) Here she is at her school costume parade and fall party. 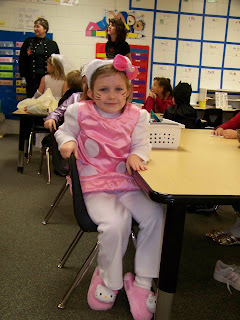