Stephen and I were sharing our special Monday together today.  The girls go to preschool in the morning so we do errands and something fun.
While at Target, Stephen was particularly interested in the bagging process while we were checking out.

Stephen:  Mom - I think I've changed my mind.  I want to be a bagger when I grow up.
Me:  Oh.  That's a pretty complicated job.
Stephen (surprised):  Really?  How?
Me:  Well, you have to figure out which groceries go on the bottom, which ones might get squished - so you put those on the top... you have to be careful about where the meats go in case they leak ...
Stephen (with new respect):  Wow.
Me:  You know, your uncle David used to be a bagger.
Stephen:  NO WAY.
Me:  Yup.  At the HEB in Texas.
Stephen:  Wow.

Then, while at lunch at his favorite stop (Arbys, people.  Arbys.) something brought Christopher to mind.

Stephen:  You know, I can find a cul-de-sac in our neighborhood.
Me:  Really?  (I am pretty sure there aren't any on the streets we take)
Stephen:  Yup.  Christopher knows.  He found it when he got lost one day.

When driving home from Arbys, he was looking at the new toy he got.  It's a book on the pyramids in Egypt.

Stephen:  Hey mom, they've got egypt writing on this!
Me:  Cool!  Your uncle Scott likes to read languages like that.
Stephen:  Like the egypt letters?  What do they call that?
Me:  I'm not sure.
Stephen:  Maybe Scott knows.
Me:  Yeah.  He likes to play detective with the languages that no one talks anymore.  That way he can figure out what other people noticed about God's people.  Like maybe the Egyptians wrote something about Moses that would give us clues about how Moses was used by God.
Stephen:  Wow.

A few minutes later after a bit of silence...
Stephen:  Mom, my uncles are pretty great.
at 1:06 PM No comments:

What a drag, right?  Seems like the chore chart becomes a chore for mom - and I don't need any more of those!
I was looking for something that was more work for the kids than for me.  Something that they would have to be in charge of themselves.  Teach a little responsibility, but keep it tactile enough for them to be successful.  Am I the only mom that shudders at the thought of my 3 year old with a marker checking off her chores?  Stickers?  Much more than the chart would be decorated!
So here's what I came up with after scrolling through the internet FOREVER.  It's a compilation of ideas - and as yet untested since it went on the wall yesterday.  And - my 4 year old is testing her limits with said chores.  But she's testing everything so why should this be any different?  :) 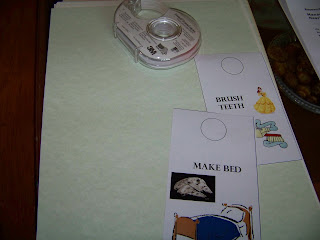 First I thought of the jobs that they already do, but that I have to remind them of (remember, the goal is to help me get off their cases - I will add more responsibilities if this thing works.).  On my computer I made a template for the "chore card," then, I found cute icons of the chores for my non-readers, and then added a character for each kid.  Stephen has the Millenium falcon, Clara has Belle, and Abbie has Cinderella.  My goal here was two-fold - 1.  Get them a little excited about their little card, 2.  Eliminate some creative job sharing.  Mama's no fool. 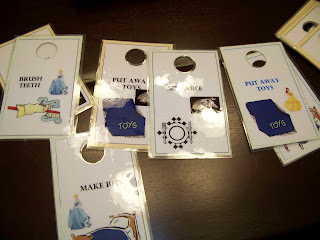 Then each chore was taped to either yellow or green cardstock.  Yellow for morning chores, Green for afternoon/evening.  Each card was laminated, then I used the free tools at Archivers to punch holes in the cards and cut them to the right size. 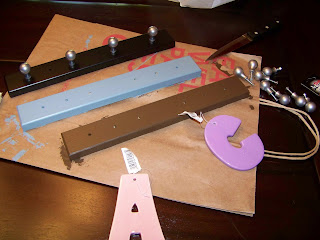 I purchased these simple wood hangers with 4 knobs from Ikea for $2.  Painted each with leftover paint from around the house, and bought letters for 1/2 off at Michaels.
On a side note, I also purchased these wood hangers for two of our bathrooms.  I put button-holes in 4 kid washcloths and hung them on each knob.  The kids use the washcloths like hand towels.  They each have one and it has really cut down on the viruses that we share! 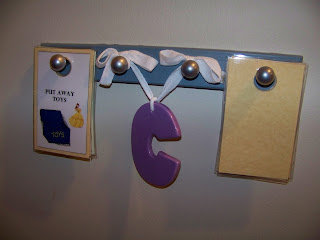 And here it is!  A little ribbon from around the house, leather shoe-lace for Stephen, and some hot-glue to put it together.  The chore hangs on the left side until they complete it - then they move it to the right side.  In the morning they work until they get to the green cards.
My absolute favorite chore was a little surprise to me.  As I was working at Archivers, I had a little light-bulb moment.  I made Stephen and Clara both a card called "Ask".  When they get to that card, they come find me, tell me what they've done for the morning/afternoon, and ask if there's anything else I need help with.  Oh yeah, this is definitely my favorite card. 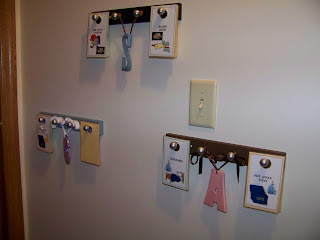 I'm pretty happy with how it looks and hopefully it works.  Stephen had his done by 7:30 this morning.  I doubt the enthusiasm will last, but it was worth one stress free morning!
at 1:12 PM 4 comments: