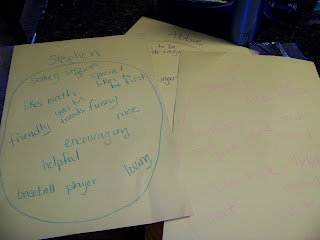 A very dear man from our church passed away early Friday morning.  His struggle with cancer was a long and difficult one.  He had lost almost complete function of his arms and legs, and gained excruciating pain.
Their family has 5 children, the youngest is just about Stephen's age.  Mr. Bob would volunteer during the Wednesday night program in his daughters class - which is how Stephen came to know Mr. Bob.  Bob came as long as he was physically able and loved the kids.  Even when he was in his motorized wheelchair, he was there.  And Stephen grew to love Mr. Bob.
When I heard Friday morning about Bob's death, I knew that God would have to guide Brian and I in our conversation with Stephen.  This is a kid who cried when a character in "Adventures in Odyssey" died.  It was going to rock his little world.
Friday night I prayed.  I begged for guidance, and fell asleep knowing that the God who loves my kids more than I do would provide.  Around 4 am on Saturday I woke up to Abbie crying.  As I covered her up and checked on the other two, I suddenly just knew how I was going to talk to Stephen.  God is so good to me, and so sweet to my kids.  I love that.
As Brian flipped pancakes Saturday morning and we sat around the table, I pulled out 5 big rectangular pieces of paper and a box of crayons.  I wrote Stephen's name on the top of the first one (in the requested green crayon), and drew a large oval.  In the circle we wrote words that described Stephen as a person.  "Kind."  "Fun."  "Smart."  "Loves to be first."  We did this for each of the family members.  There was a slight skirmish over the purple crayon - but other than that the kids loved the exercise.

~ insert conversation on which letter soul starts with, how it's spelled, what their sheets of paper say, and how Abbie possibly has the most syrup ever. ~

"Souls live in bodies.  Sometimes bodies die, and if that person loves Jesus, they get to go to heaven and get a new body!"
As I spoke, I held the picture in front of me, then moved it up into the air.
"I love Jesus!"  Stephen exclaims - with thoughts of a new super baseball player body, I'm sure.

"Mr. Bob went to heaven to get his new body on Friday.  He might even be running around in heaven right now without his wheelchair!"
"Really?"  Stephen asked.
"Yup."
"His body here is empty now.  And that's kind of sad because we won't get to see him again until we get to heaven,"  Brian said.

At this, Stephen seemed to understand the finality of Bob's death.  His face got so sad.  It truly breaks a parents heart to see their child mourn.  I opened my arms, and with big sobs Stephen poured out his heart, first to me, then to Brian.  We held him and cried with him.
On Wednesday morning we'll go to the memorial service for Bob.  I'm sure we'll have to get there early as it will be packed.  Bob truly was an amazing man who touched many.  His service is planned to be a celebration of the gifts he received in his life and of the God he loved so much.  I'd like to ask for your prayers as we show Stephen his first memorial service and will surely have more questions to answer.